Just before we set off on our travels this year, I noticed a photo on face­book, pos­ted by a “page” I fol­low called Vis­it­I­era­petra. It was a photo of a beau­ti­ful look­ing fresh-water gorge, appar­ently very near to Iera­petra in South-East Crete. Hav­ing vis­ited Iera­petra over 20 times and hav­ing friends who live there, I thought I’d prob­ably seen all of the loc­al high­lights, but I’d nev­er heard of this gorge. A bit of research on google indic­ated that the gorge wasn’t par­tic­u­larly well known, at least to Eng­lish speak­ers. I gathered togeth­er what inform­a­tion I could and made a vow to find the place.

After sev­er­al days get­ting settled back in Crete we set off to find the gorge. I had a sus­pi­cion that I knew where the trek star­ted as a couple of years pre­vi­ously we’d dis­covered a river a short dis­tance from Iera­petra, and with fresh water being fairly rare in August in South-East Crete it seemed the logic­al place to start. Luck­ily it turned out to be the right place.  The gorge called Sarak­ina Gorge, but is also known as Myr­tos Canyon and to loc­als as Sarantapi­hos.  On google maps the river is labelled as “Myr­tos Pot­amos” (i.e. Myr­tos River) although it is more cor­rectly called Kri­opot­amos.

Some advice before you set off

You will need foot­wear that you would con­sider suit­able for a “scramble”; I wouldn’t recom­mend flip-flops for example! Equally, you are likely to get your feet in the water, so expens­ive shoes or train­ers might not be the most sens­ible option either. I wore some “flossy shoes” which are effect­ively plim­solls.

There are a few parts which would be a con­sid­er­able chal­lenge to any­one with a ser­i­ous fear of heights, young chil­dren, any­one with a phys­ic­al dis­ab­il­ity, or any­one eld­erly. I would sug­gest the route is prob­ably doable for any healthy indi­vidu­al aged 8 to 70, but I’d exer­cise con­sidered judge­ment at both ends of that scale. 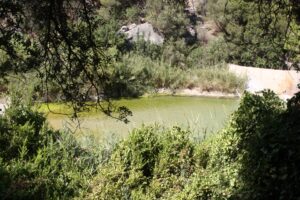 How to get there

So, before I go any fur­ther I’ll give some clear dir­ec­tions (by road) to the bot­tom of the gorge, as I haven’t been able to find any in Eng­lish any­where else. The Gorge is just over 4 miles from the vil­lage of Myr­tos.  From Iera­petra drive West along the South coast on the main road (called “Iera­petra-Arkalo­chori­ou” on TomTom, and called “Epar.Od. Pachi­as Amou — Gdo­chia” on Google Maps).  Pass through Gra Ligia and Stomio and con­tin­ue towards the vil­lage of Myr­tos (loc­ated 8½ miles West of Iera­petra). Just as you enter Myr­tos you cross a river­bed on a bridge. This is the river­bed that the water would flow down, but it doesn’t reach the coast as it is col­lec­ted upstream, pre­sum­ably for agri­cul­tur­al usage. Whilst it would be pos­sible to walk up the river­bed (or the road along­side it) this would be sev­er­al miles in the hot sun, so I’d recom­mend stay­ing in the car for now.

Fol­low the main road past Myr­tos which curves away to the North (to the right), back up into the moun­tains. 0.85 miles after cross­ing the river­bed by Myr­tos you will see signs for a right turn towards the vil­lage of Mythi. There is also a sign in Greek and Eng­lish point­ing to the gorge. Fol­low this road, and after 1.6 miles you will pass through the vil­lage of Mythi. Con­tin­ue along the road, which will still have sign­posts to the gorge. After Mythi the road starts to drop again. After anoth­er 0.65 miles the road appears to be cross­ing the river­bed again and start­ing to wind back up. Here, on the left, is a gravel park­ing area and some con­crete struc­tures. You should also be able to hear run­ning water. Park on the gravel area. Con­grat­u­la­tions, you have arrived at the start!

Scrambling up the gorge

Once you’ve parked (and had a look at the con­crete con­struc­tion that “dis­ap­pears” the river itself into a hole) you can set off up the gorge. There are some steps on the left hand side of the car park with trees hanging over them. Climb up these and at the top (there’re only 30 or so steps) the path turns right, par­al­lel to the river. You can fol­low this for a couple of hun­dred metres. After this the scram­bling begins.

I sus­pect it is pos­sible to walk the gorge without get­ting one’s feet wet (at least in August), but to do so would be quite a chal­lenge. With the tem­per­at­ure in the 30’s and appro­pri­ate foot­wear we opted to walk in the water in some places. There are also a few places where a large boulder (3–4m high) must be scaled – in these places con­sid­er­able hand and foot holds have been cut well into the rock.

The route isn’t always obvi­ous (although in a 10m wide canyon there isn’t much search­ing to be done) but there are faint yel­low arrows painted in quite a few loc­a­tions, and painted red squares on rocks that are part of the route. Using these (and the obvi­ous carved foot holds) makes find­ing the best route rel­at­ively straight for­ward.

After around 500m (a pretty rough guess on my part) you reach the only decent depth part of the river in this part of the gorge – a pool which is around 7m wide by 8m long and 2m deep at its deep­est point. This is the best place to go for a dip if you wish to do so. Also, after here there are a couple of tricky parts which have a rope provided to help. If you have any less con­fid­ent mem­bers in your group this would be a good place to stop before head­ing back. If you’re con­fid­ent enough on the rope there is only a couple of hun­dred metres to go before you emerge from the gorge into a more gentle val­ley where the river is slower and there are lots of trees and plants. This is as far as we went.

I under­stand that we walked the “first” of 3 parts of the gorge.  The second part is the gentle val­ley area with the tree and plants (espe­cially bam­boo).  After this there is appar­ently a third part of the gorge which has much deep­er water, where swim­ming might be required. 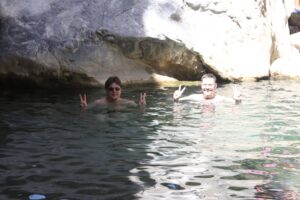 In August 2014 I returned to Sarak­ina gorge with 4 friends. This year there was almost no water at all in the gorge, even though we went on almost the same date as in 2013. We all climbed up the rope at the end of the first sec­tion and explored fur­ther. The second sec­tion is very easy as it is just a gentle stroll along a wide flat river­bed with part of the walk along a dirt road. At the end of this there is a fork where 2 rivers join. We explored around 200m up each fork. The west­ern (left hand) fork quickly becomes very dif­fi­cult to fol­low whilst the east­ern (right hand) fork con­tin­ues to be wide and gentle. It is pos­sible to walk back along the dirt road up to a paved road, and from there back along the paved road to the start of the gorge. We did not explore any fur­ther, but hav­ing done some more research I am hop­ing to explore the east­ern fork much fur­ther in 2015.

In 2014 I again walked in plim­solls. My bet­ter half wore her beach shoes, and anoth­er mem­ber of our party did the full walk in his flip-flops. When the water level is low (i.e. in sum­mer) these kinds of foot­wear are suit­able, although prop­er san­dals would be the ideal. Oth­er reviews I have read insist on prop­er walk­ing shoes being the answer but I assume these must be refer­ring to much earli­er in the year when there is a lot more water and it is neces­sary to take a more chal­len­ging route along the sides of the canyon.

Got some thoughts of your own? Indulge yourself below by commenting! If you would like to subscribe please use the subscribe link on the menu at the top right. You can also share this with your friends by using the social links below. Cheers.

A great help thanks we could­n’t find any detailed info else­where, we are hop­ing to go tomor­row with two 15 year olds. Shame there’s no water though.